Ships log for the yacht "Sparrow" an Ian Anderson designed
'Hurley 20', sail no. 109, launched 16th November 1967.
This is the day to day stuff involved with owning and sailing a
small boat, so nothing earth shattering but there'll also
hopefully be some adventures along the way.. 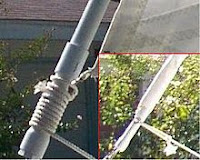 Hottest day of the year so far but the tides are early and late this weekend (one of the joys of being on a mud mooring) so looking at the tide times and forecast I lumped for a late afternoon Saturday sail this weekend rather than wait for lighter and later tides on Sunday (good decision I think; as I write this the following morning, the weather beacon at the bottom of the harbour is showing zero wind)
Not a long sail then but a remarkably pleasant one, and also good for getting some stuff sorted out that was niggling..
Springs again, so a good couple of knots to fight up the channel and down the harbour, so I opted to motor sail to Marker (a plan I formulated a couple of years ago and which works well - if you don't do it, you can spend the entire afternoon just taking in front of Marker!) so not surprisingly, despite tide, the tacking angles look good to just past Marker when I finally got fed up of the racket and turned it off..

The new (to me) Suzuki motor is surprisingly fast despite being the same size as the old Tohatsu, she shuffles you along at a far faster average speed (not scientific, but most of the time I use about a third throttle, same engine revs by ear, but the Suz is about a knot faster than the Tohatsu). Very noticeable that even in idle with this engine there is good forward way, but hardly any noticeable noise..  would be a good trolling engine..
Dropped the mooring at 15:00 then (just over 3 hours before high tide), engaged auto pilot* to get the main sail up as I headed towards the bridge, an then bore off down the Northney trench..  very very shallow, I could see bottom almost all the way to the entrance of the marina
Wound out the jib, which despite tightening back stay/forestay is still stupidly stiff, and then reached and finally beat to the far side of the harbour to start a few tacks to get me past Marker where the harbour widens out and the tacks can get longer, and the engine went off...
Not busy out there despite the weather, which I put down to being the end of the day, but it was a much nicer breeze than I was expecting and the sail was fantastic..  turned just shy of Verner (when the wind was beginning to die) and ran downwind on auto* while I sorted out the jib...
Clearly forestay tension was not the issue, but while the sail was out I wanted to tension the jib halyard. It is a lovely place to be on your own boat sailing solo, right there on the nose... you can hear the water chuckling away under your feet, and amazing views...  anyway, undid the downhaul (I use a bit of dyneema line) and hauled on the jib halyard and up she shot another 6 inches - much better view under the sail but dyneema line now too short, so dropped her two inches, tied her off, and cranked on some down haul..  success.. the sail is very very much easier to roll in.
Motor on about Northney, and with the apparent wind on the nose I dropped the main under auto* as I came down the Northney ditch - finished off with a picture perfect mooring pick up. Brilliant!

*Are you allowed to say you love your autopilot???
Log: 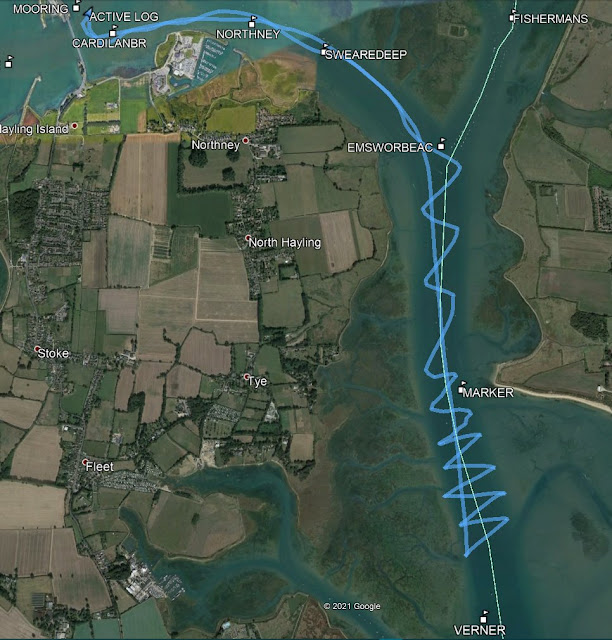 Almost 3 weeks after I put the sails on and did the initial rig tension, FINALLY today gave an opportunity to get out for a sail...
Succession of duff tides (early and late), huge amounts of rain (I emptied a bucket full out the other weekend), gales, and just general blechhhh, has left little opportunity or interest to get out on the boat.. even today was not perfect, it was surprisingly cold for mid summer and I ended up rooting out a jumper at one point...
South, or south south east, and three hours before a biggish high tide meant that I spent most of the session using not much wind to beat against a big tide - tacking angles were rubbish as you can see from the track, but yeah was good to get out on the water and shake down...
Stays needed tightening (now done), the GPS mount fell apart (now new bolted), forgot the auto pilot (doh!) but the outboard worked well (not sure I don't need a new primer bulb, though - it doesn't pump well), the sails went up OK (though the roller furler is very stiff) but I haven't forgotten how to do it so good result 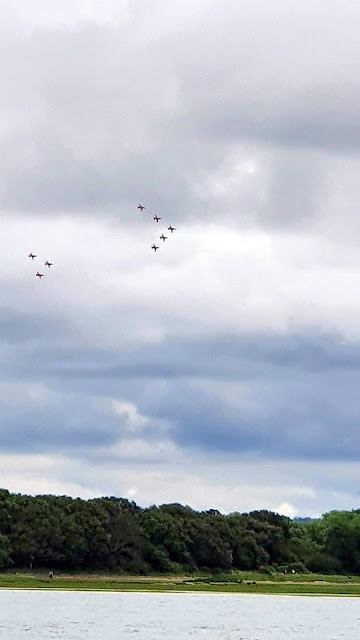 Festival of speed is on at Goodwood this weekend and these guys came in low over the boat just after I set off...  scared the living daylights out of me.. 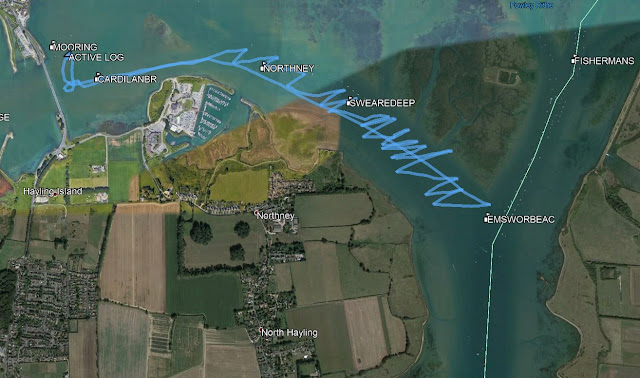 ...so it was that on what was quite possibly the best day we've ever had for raising a mast, the Jolly Boys "mast raising annexe" convened on Sparrow on Saturday afternoon to do the job we were born to...
What can I say? Easily one of the best raises we've done..  which given it is the first time we've done it in over 24 months is not bad going at all -  no issues, no surprises.. and up she went to be followed by beer, banter, pork pies and kettle crisps...  a libation was made to Neptune, the boat and the skipper in equal parts, fair winds, please... 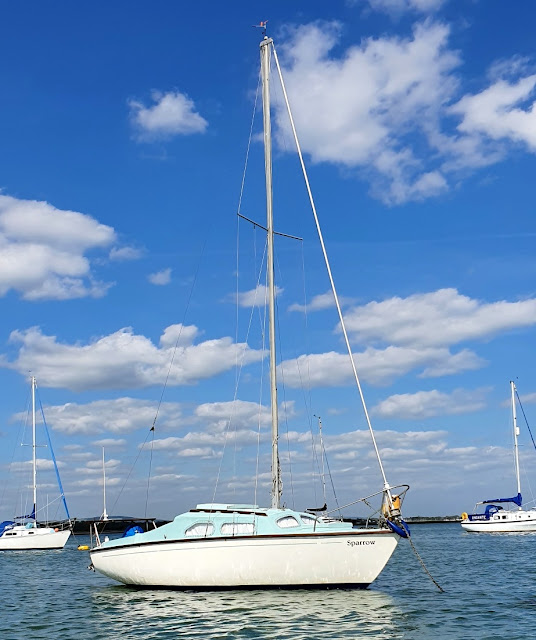 ...then on Sunday, in more astonishing weather, I came down and put the rags on, but not before I had to repair a rowlock on the tender - opposite side to the last repair, and a right royal bodge, but it did the job and all I needed was for it to be secure to get me out to the boat... 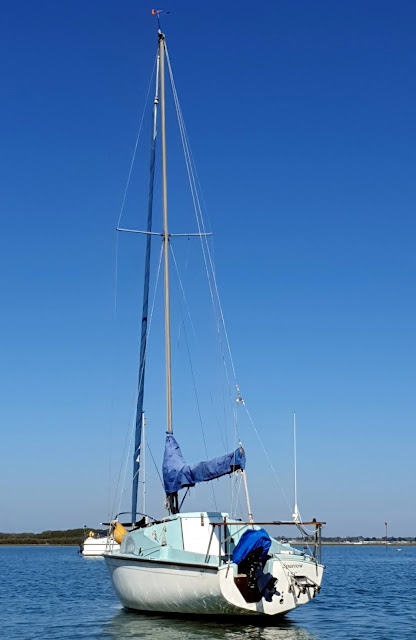 Half way through, Smithy came by on his kayak, so the beer supplies were damaged again, but it was good to sit in the sun, chat, talk rubbish and watch the world go by..  so that's it, all done...  better go sailing then!
at June 17, 2021 No comments: 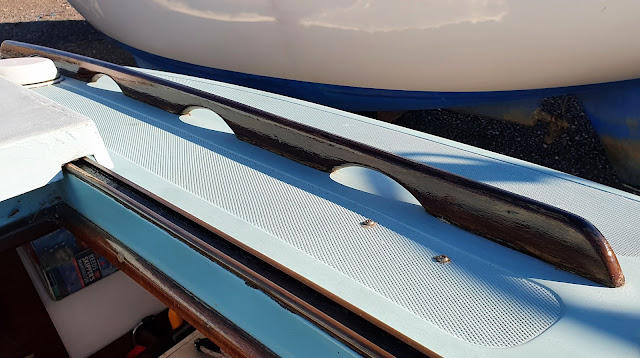 look, shiny..  given what they looked like before that's a little more than miraculous... 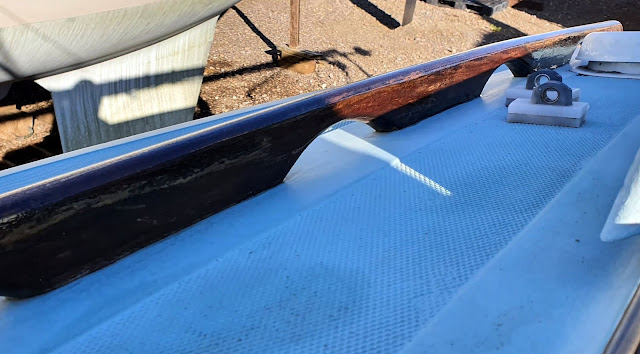 ...as I had the varnish out, the tiller got the same...  I also rubbed down the companionway sides and gave them two coats as well...  varnish central.. 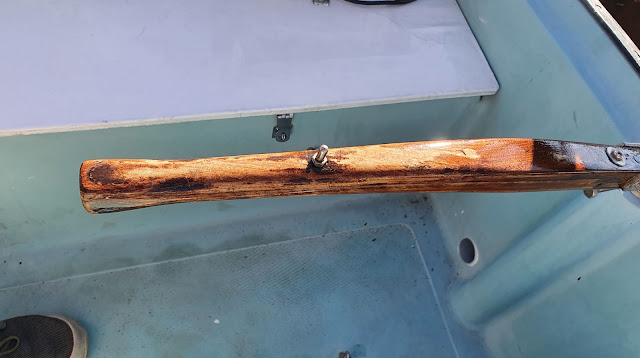 Pleased with this one...  there are moments when you need to disengage the auto pilot from the tiller and then you have the issue of what you do with it, to stop it flopping all over the place..  it was driving me up the wall..  answer? Plastic uPVC pipe clips.. 20mm size... 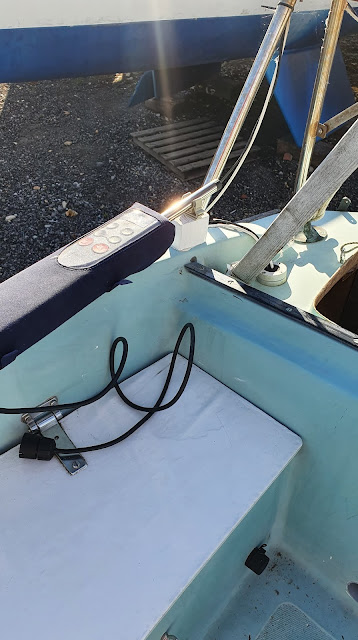 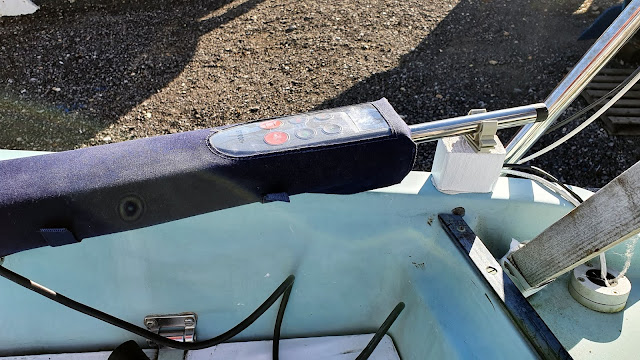 Seemples, when not in use the wand/ram just clips in and is held...  chuffed to nuts with this one..  simple things... 😀 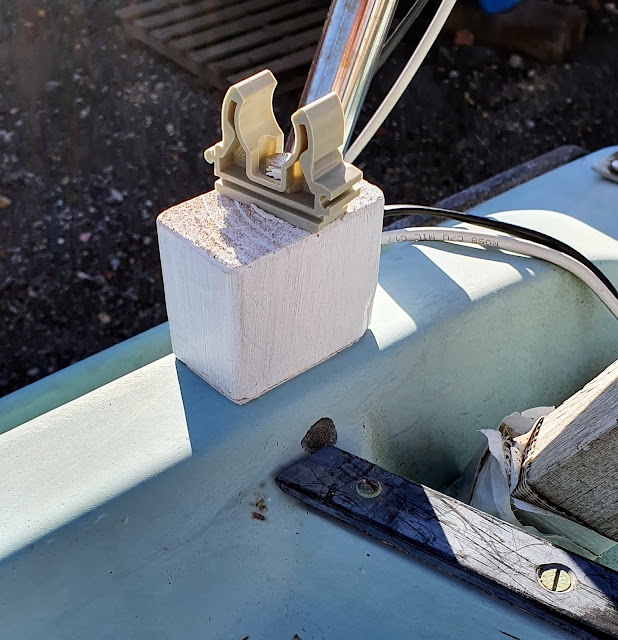 Don't laugh (Jolly Boy skipper Rod the Mod already has)..  I have  history with windex's but they are quite useful...  lost the arrow on the last/latest one, but as I still had the arms I just replaced it with a dinghy indicator 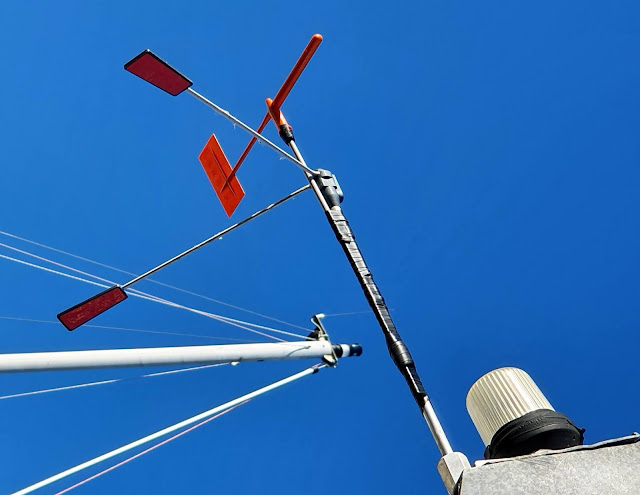 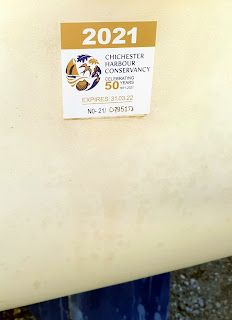 Morning of the launch and fit the outboard.. more importantly though, will the lock fit...   answer yes, but only upside down..  decided I don't care, and that will do very nicely..  I may have a play about to see if I can turn it over, but upside down is OK - what I will do is get a plastic bag to keep the water from filling it up.. 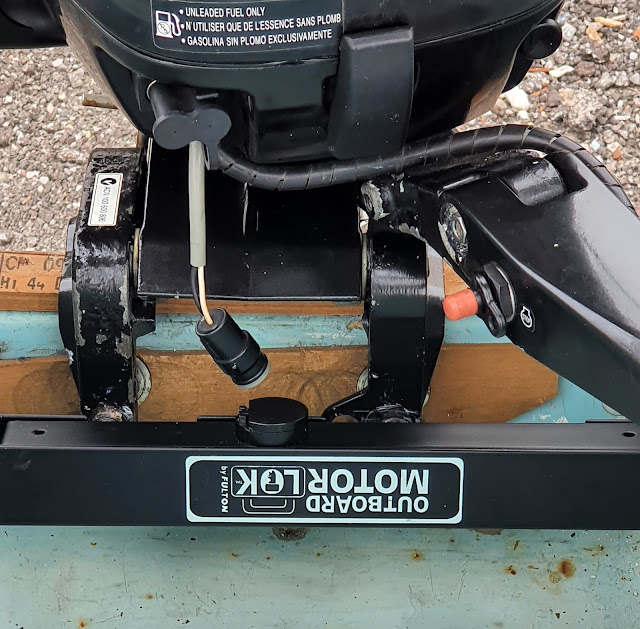 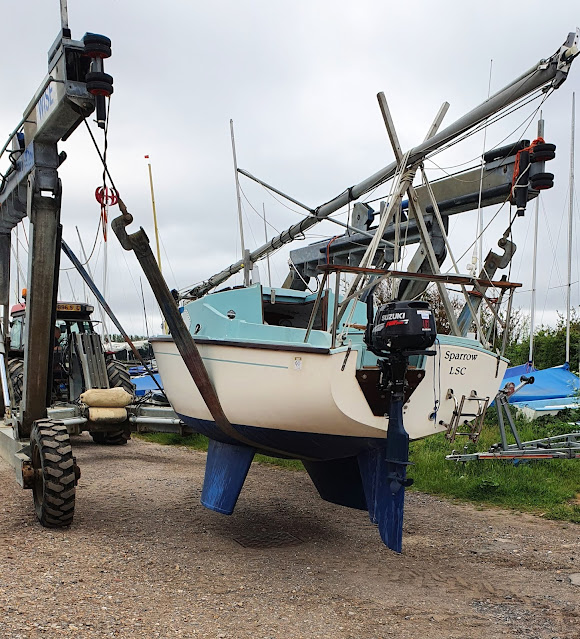 ...dragged Sparrow off, and set her down on the mud and shingle to await the tide... 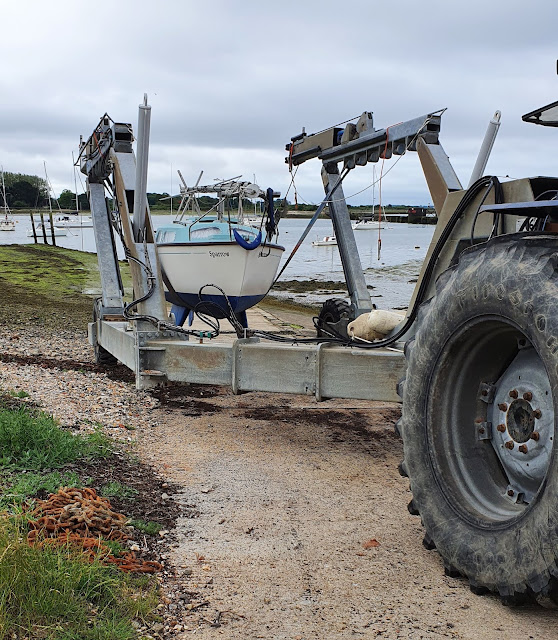 ...and an hour and a half later I was on the mooring for the first time in 18 months...  been a lonnnnnnng wait...
A good launch for me, 3 other boats also went in, but one came straight back out (leaking skin fitting..  a new one)..  we also recovered a boat that was already in, but which had hit some object floating under the water in the harbour and given its rudder an almighty clout, the rudder was bent at least 10 or 15 degrees out of true, and had lost a pivot pin..  very worrying for the skipper, and an earlier end to his season than he would have hoped, though he's hopeful to be back in again this summer... 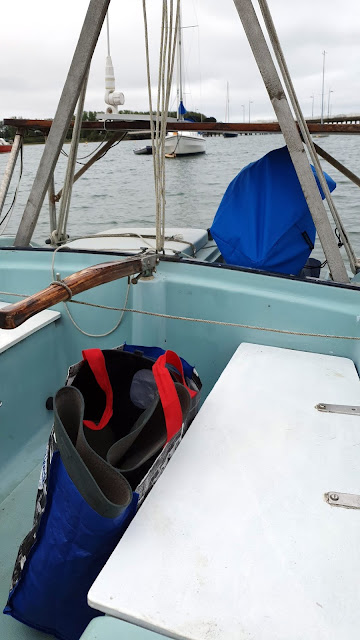 The Jolly Boys are convening Saturday afternoon to put the mast up..   should be fun, I only hope we can remember how to do it!!
at June 10, 2021 2 comments:

More jobs being done.. and a launch date.. 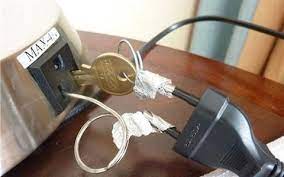 ...the annual bodge'fest that is the job list on Sparrow continues...

First on the list was a club duty - we're a self help club, and I've taken it upon myself to maintain the tender pen we have on the Chichester harbour side (where I keep my tender - so I'm not entirely without interest) - the grass in the pen was up to my waist at least (small exaggeration) but an hour and a half with a strimmer later and it was up to my ankles..  I'd also discovered at least three Japanese soldiers waiting for the end of the war to surrender, and sent them to the pub..
Time for a beer and to contemplate the next job - and I apologise wholeheartedly for the lack of pictures - you're just going to have to believe me..